Let me start by saying that the struggle for abolition must be and already is international. As Ruth Wilson Gilmore said: “Reforms will not end prisons. Abolitionism has to be Green, Red, and Internationalist.” However, some words of caution are needed. In my experience there’s two main tendencies, at least among a good portion of the U.S. left, to relate to international struggles. Either they are absent, because the domestic conversation takes all the space and international struggles always appear as secondary, or there is an a critical presentation of fights around the world as inherently radical, which many times comes coated with a layer of paternalistic codependency that also shows a lack of historical knowledge of anything that has happen beyond the U.S. borders. At the same time, I want to recognize that the abolitionist framework that inspires me today has been developed primarily by black women born and many times still today doing activism within the U.S. and that many times, seems absent from some of the international conversations/collective actions.

I want to start at the border. What we need and work towards is a global prison abolitionist movement based on opposition to all forms of exploitation and domination. We must as Dylan Rodriguez puts it: “Embrace the obligation that accompanies the term abolition — a complex, dynamic, and deeply historical shorthand, if you will — in the work of constantly remaking sociality, politics, ecology, place, and (human) being against the duress that some call dehumanization, others name colonialism, and still others identify as slavery and incarceration. Abolition, then, is constituted by so many acts long overlapping, dispersed across geographies and historical moments, that reveal the underside of the New World and its descendant forms — the police, jail, prison, criminal court, detention center, reservation, plantation, and “border.” Abolition as Praxis of Human Being: A Foreword

And with this in mind, we must incorporate the dismantling of national borders as a key piece of our struggle. And we must as well be plotting not only locally or nationally but internationally, creating alliances and learning from each other, inspiring each other in our common fight and this is what I’m working towards today.

And the struggle needs to be against borders because the national borders are ‘ideological molds’ that generate power relations and subjectivities, because the border is a repressive technology that reproduces heteronormative relations. As Bridget Anderson, Nandita Sharma, and Cynthia Wright say: “It is not only “hard workers” who are produced at the border. “Good wives” who do not challenge patriarchal families, “straight guys and gals” who adhere to correct sexual scripts, “good parents” whose parenting accords with the requirements to produce “good children” are policed through immigration requirements.” “Why No Borders?”

We must also acknowledge that when queer immigrants seek asylum they are compelled to prove the sheer brutality of their home cultures helping portray at the same time the U.S. as a place without repression to queer folx, thus helping obscure the reality of queer life in the United States, where both normative and non-normative homosexuality are continually policed and brutalized.

Importantly queer asylum seekers are forced into cultural stereotypes as many times asylum officers → elements of the repressive apparatus of the state, refuse admission on the grounds that applicants don’t “look” or “act” gay/lesbian enough.

This brings me to the other part, which is some context and current developments of struggles against police spearheaded by queer folks in Latin America. My focus is on this area of the world for both reasons of time and knowledge, and certainly it won’t be an exhaustive account but will hopefully spark conversation. 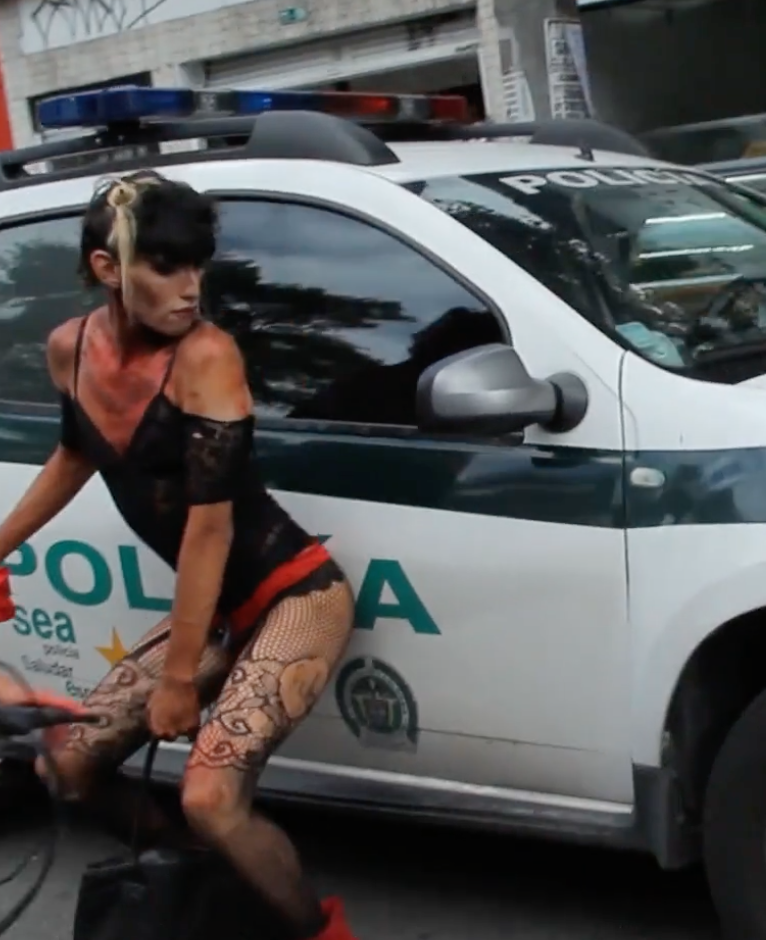 The dancers are part of the emergent trans-feminist marikon resistance front in Colombia, a group that seeks to use art as an intervention against police brutality. This matters because, like in the U.S., trans women particularly have been at the front lines fighting against police for many decades in Colombia, Chile, Argentina, Brazil, Peru, etc. and they also have been the main targets of police violence.

The history in Latin America of violence against queer and particularly trans folx can be traced to colonization, and we know that conquistadores would publicly executed indigenous peoples for being trans. The bloody imposition of catholicism further legitimized these killings.

Our historization then must highlight how colonization was and is also a heteronormative project, and how this is at the base of the continuation of violence against queer folks in many places of Latin America where is particularly non-white trans folks who are murdered by the police.

Here we see pictures of queer activists fighting against the repressive state in Peru after last November’s coup. Peru activists like Gahela Cari Contreras make connections between police violence against indigenous folks that are fighting against extractivism of natural resources, continuing colonization and imperialism, and the struggle of indigenous queer folks against the police and pushing for a new constitution of Peru. The image on the right reads: “Cops are not fags they are straight and rapists”

You probably know her, but if you don’t, this is Marielle Franco, a queer citiy council member in Rio de Janeiro from the PSOL (a leftist political party in Brazil) who was murdered by the police, after years of fighting against military police violence in Rio’s favelas, where she grew up. In her assassination we see the combined forces of homophobia, racism, and anticommunism that made her a target of Jair Bolsonaro’s facism. (President of Brazil)

Struggles against the police have also been spearheaded by sexual workers, who overwhelmingly suffer police violence in LA. Trans women sex workers and specifically black trans women sex workers, suffer particularly brutal forms of violence on the hands of the police and have been resisting publicly for many years. In Argentina for example, sex workers have their own union, and fight against the carceral state not only by asking for recognition as workers and against their criminalization.

Another important part when we think about queer activists fighting against police in Latin America is that the U.S. instigated and backed dictatorships of the second half of the 20th century relied heavily on rape and sexual assault as a form of torture against queer folks and women who were organizers, activists, intellectuals, workers, students, fighting against capitalism. This long history of sexual assault as one of the main weapons of police forces in Latin America continues today, as the events last year in Chile show.

Which brings us to what I understand to be the most radical collective organizations that have taken center stage in Latin America in the last decade, feminists organizations that have struggle to decriminalize and legalize abortion, against the brutality of the state against the bodies of women and ‘sexual disidences’. And beyond thinking about the fight for abortion rights we need to highlight the struggle against police brutality, criminalization of sex work, and the murder of women and queer folx by the police. In Argentina, 1 in 5 femicides are done by members of police forces, 6 in 10 in brazil.

As I said in the beginning there’s much more that could be highlighted and shared. While there is a consistent and radical struggle against police violence primarily lead by queer folx and women in Latin America, there is a less prominent conversation about abolishing prisons. In some cases, some collectives have put forward what I understand as very limited and reformist demands, although of course that is not always the case. Prominent anti-police organizations still use frameworks of justice that rely on the carceral apparatus, in the same way that that still happens in the U.S.  I do think that this is partially what should be compelling us today as well, to think how to bridge discussions, how to discuss collectively with folks in Latin America and the global south fighting against police, fighting against U.S. military interventions and share the framework an experience of radical folx in the U.S. who have been showing that fighting against police means abolishing prisons and striving for a new form of justice.